Carol Beuchat PhD
The transition from fetus to neonate is physiologically strenuous for a puppy. Like an astronaut at the space station, working outside the station requires a transition from an environment with the adequate air pressure and oxygen for normal respiration, to one completely lacking these things. To survive a space walk outside the vehicle, the astronaut needs a suit that can be pressurized and provides oxygen. A failure of those systems to work properly is catastrophic.
In a perfect world, every puppy would be fully mature, with all systems go, at the moment of birth. But as many of you know, the reality can be very different. Dogs have surprisingly high neonatal mortality. It varies considerably from litter to litter, but the average frequency of stillborn puppies that are fully mature with no evident defects is variously estimated as 5-30%. Some of these puppies respond to resuscitation efforts by the breeder; in fact, puppies are fairly tolerant of short periods without respiration or a heartbeat.

In addition to the stillborns, a significant number of puppies are born alive and breathing, but are struggling with fluid in the lungs. You can hear this liquid crackling as the pup struggles to breathe. For the oxygen in inhaled air to reach the blood, it needs to pass through the thin membranes lining the alveoli of the lungs, but fluid in the lungs prevents this. Removing this fluid so oxygen transport to the blood can occur is a matter of life or death for a newborn puppy.
One of the techniques that has been used to remove the fluid from lungs of a puppy immediately after birth involves holding the puppy in the hand with arm extended and "swinging" the puppy, head down, in an arc. This will often successfully clear the fluid in the lungs so the pup can begin to breathe normally. I have seen many breeders do this, and there are videos and instructions online for those unfamiliar.

But swinging puppies to clear the airways is a really, really bad idea.

I have to confess that the first time I saw this done, it literally took my breath away (not a pun). Swinging might move the fluid out of the lungs, but it causes ALL of the fluids in the body to move towards the head of the puppy - blood, cerebrospinal fluids, stomach contents, and any other fluids in the body. This is NOT a good thing, and I will explain why.
Perhaps you have seen how astronauts are trained to tolerate the g-forces produced in space flight. They use a huge centrifuge with a capsule at the end of a long arm. The test subject is in the capsule, and as the centrifuge rotates, the g-force experienced by the human in the capsule increases; the faster the rotation, the greater the force.
Take a few minutes to watch this video of the human centrifuge in action.

The expressions on that fellow's face tell you something about what you look like when the force of gravity is higher than your body is designed to tolerate. There is great pressure on the body, making it difficult to breathe, but, perhaps worse, the body fluid want to rush to the head. In an adult humans (and dogs), the physiological systems that control blood pressure kick in immediately to try to maintain normal fluid pressures in the organs and vessels.
Now think about the puppy with fluid in the lungs. (In a newborn, this will ilkely be amniotic fluid, but it can also be milk that is aspirated when nursing or being hand fed.) A newborn puppy is not a small version of an adult dog. Many of the organs are not mature at birth (e.g. eyes, kidneys), nor are the systems that control blood flow and regulation of blood pressure. In the newborn puppy, the circulatory system has a much lower pressure than in the adult dog, and the immature nervous system has very limited ability to control it (Grundy et al 2009).

Your body does a good job of regulating your blood pressure by changing the diameter of blood vessels (constrict or dilate) and increasing or decreasing the heart rate to keep blood pressure from going too high or too low. If you have ever stood up quickly and started to black out, this is your body momentarily failing to maintain the blood pressure in your head; in just a second or two, everything will return to normal as your body automatically adjusts blood pressure and heart rate to restore adequate oxygen delivery to your brain.

The systems to control blood pressure and tissue perfusion in the dog are essentially the same as your own, but they are not fully functional in the newborn puppy. A puppy is more like a premature human infant at birth, with organs systems and regulation not yet fully developed. Because of this, insults that would be handled easily by an adult dog can be much more challenging to the newborn puppy. Control of blood pressure is one of these.

This is a real problem if the puppy is swung in an arc to remove fluid from the lungs. Watch this fellow (a veterinarian, apparently) demonstrate.


Raise your hand if you gasped when you watched this. Or maybe you even stopped breathing. Think about that astronaut in the centrifuge. Try to imagine what would be happening inside the body of a tiny puppy. That puppy is being swung HARD.

Yes, swinging might help remove fluid from the lungs of a newborn puppy. But it can also cause brain damage.

What happens to the brain of a puppy that has been swung to clear its airways?

The puppy might have no obvious signs of physical trauma; there are no surface lesions and few behavioral changes (after all, the puppies only have two activities, nurse and sleep). There can be seizures, which might be the only significant outward evidence of serious damage (Grundy et al 2009). However, examination of the brain tissues will reveal evidence of trauma manifested as subdural and intracerebral hemorrhage.

There is nothing known about the consequences of swinging newborn puppies, but it would be naive to assume that there are none. Breeders should be educated about the potential damage done to the delicate tissues of the brain by swinging to remove fluid from the lungs. There are a number of devices that can be used to facilitate removal of fluid from the airways effectively and safely (Grundy et al 2009).

Always remember that a puppy is like a premature infant, not a tiny adult, and it has very limited physiological reactions in response to the stresses that are handled easily by the adult dog.

Was this article useful? 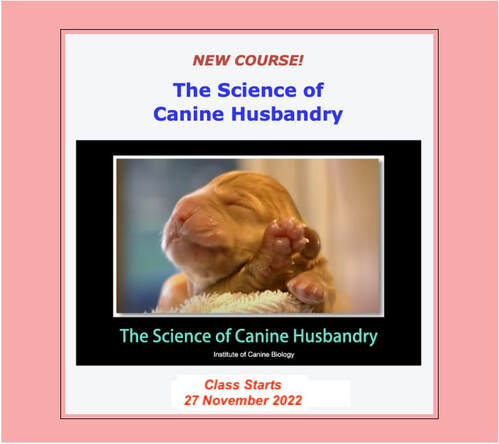 
To learn more about the genetics of dogs, check out
ICB's online courses