How did you get Started with Pit Bulls?

Where did you get your first Pit Bull?

Did you get to Match him?

STP: No, she was a house dog. I got the next dog from Charles Sykes, who was out of Sykes`CHERRY and she was a litter mate to SykesÂ´SAMPSON, the dog that won over CH. Rascal.

At that time did you have anyone to look up too?

STP: We used to go over to Jack KellyÂ´s place. They had a spot in New York and on Sunday mornings weÂ´d go over there and they would roll dogs and occasionally have some matches. We met Andre Giroux, Ozzie Stevens and the dog men from Rhode Island like Indian Eddie and Joe Goffart.

How did S.T.P originate?

You guys owned a lifetime of good dogs, which did you think were the best?

Who are some of the best handlers and conditioners you have seen in the game?

STP: James Crenshaw, always sees to have a dog in exellent condition. Ozzie Stevens. The late Barney Fife and Ben Calloway always had their dogs in great condition.

What were some of the best matches you ever saw?

When it comes to Match dogs what style do you prefer?

STP: I like a dog that work anywhere he has to. A well balanced dog with talent, speed and good natural air.

Do you think traveling with a dog to a Match has a big effect on a dog?

STP: I donÂ´t think it has much effect at all, unless the dog gets car sick or really stressed.

How do you go about choosing a judge?

STP: Some one who is experienced dog man and has Judge several shows.

What about giving up weight? Would you take the forfeit and go on with the match?

You have been competing for over 30 years and won in times from 30 minutes to 3 hours. Which do you consider your best win?

How did that Match between two Grand Champions come about?

STP: BUCK was retired 6x winner and four years old and we Started to do some breedings with him. Ricky Jones was the big man in the South and we were doing pretty well in the North. There was some talk about who had the better dogs, The North or the South. We called Ricky and said letÂ´s do it and he was ready. Both dogs were close to six years at the time of the match.

Do you have any suggestions when it comes to conditioning?

STP: I like a manual, slat mill, strength work and hand walking. Road work is good but we never did a whole lot of it. We prefer Treadmill work to anything else.

When looking for a stud dog, what qualities do you look for? Since I have been in the Game and with all the research I have done, has bred to more Champions and Grand Champions. Do you guys really believe in your slogan, P/”Performance is everything when it comes to a stud dog?

STP: Yes, performance and the bloodline to back it up. When it comes to breeding performance is right at the top, but it is also important that the stud come from a proven line.

What do you think works better, Inbreeding, Line Breeding or complete out crossing?

STP: We always practice what I should call “Loose Line breeding” with the emphasis on good dogs. I donÂ´t particularly care fore Inbreeding and will out cross a good proven to a good dog as long as both come from good bloodlines themselves, even tho they are unrelated.

IÂ´m going to mention a few bloodlines, would you elaborate on their performance and producing?

STP: I only know what I read in the magazines and what I hear. IÂ´ve heard CHINAMAN = FRISCO dogs are rough but I have never matched any and really canÂ´t say. JEEP + RASCAL dogs? JEEP was obviously a great producer but I never seemed to have much luck with that bloodline.

You had some success with “BOYLES” dogs. Can you tell me something of the ones you have had?

STP: Over the past 7-8 years we have had some very good Boyles dogs. They seem to be very well rounded dogs, with high ability along with Gameness and a lot of intensity. They are early starters and one of the best bloodlines that IÂ´ve seen over the years. We had Gr.CH. CANDY and CH. BLACK PAZMANIAN. We bred PAZ to MISS RAGE, to CHINA GIRL a daughter of BUCK and we got some very good dogs * CLEAN MARY, BAD ROSEMARY and MARY LOU. ROSEMARY had the hardest mouth that I've ever seen.

Gr. CH. BUCK was your favorite dog, but it seems you never had much of the Patrick bloodline?

STP: BUCK was the hardest dog to beat that we ever had, but at that time there wasn't a whole lot of Patrick dogs in this part of the country. Consequently most of the breedings made with him are out crosses and he still produced real well.

What about the Red BOY x JOCKO bloodline? It gave you two Grand Champions and several Champions. Was that your favorite bloodline?

STP: Over the years we have probably had more success with Red BOY x JOCKO than anything else we had. Dogs like Gr.CH. JOHN BOY, CH. TORO, CH. CLYDE, CH. SASSY, Gr.CH. LUKANE. They were all tough, durable dogs.

What advice would you give to young dog men just starting out?

STP: Be objective. DonÂ´t be kennels blind and be the toughest Judge on your own dogs. Believe what you see, donÂ´t add or subtract anything more then what you see.

Nobody has ever had your record of 24 Champions and 5 Grand Champions. Do you think anyone will ever tie or break that record?

STP: Probably. But it will take a lot of hard work and dedication.

You have accomplished everything you wanted in the Game. Do you feel you would like to retire?

STP: Nope. IÂ´m going to compete till I canÂ´t walk

An Interview with STP - Game Dog History | Dedicated to Gamedogs 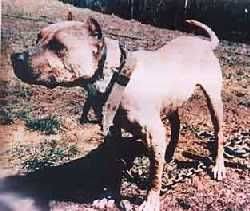